OIL AND GAS IN AFRICA

Brief Overview of the History

While the oil fields in north Africa began to be exploited from 1918 onwards, oil production on the continent did not see rapid expansion until after the Second World War as Middle Eastern oil was deemed more accessible and received greater investment as a result.

The continent saw production increase by a factor of 20 between 1960 and 1970 with instability in the Middle East (in particular, during the 1970s energy crisis) emphasising its growing importance.

A lot of this growth is attributable to the influence of western companies, which were keen to exploit what they saw as an untapped resource in what has been termed a “New Scramble” for African resources. Shell and BP, for example, shared an effective monopoly on Nigerian oil extraction, with relatively little of the proceeds making their way back to Nigeria. As discussed at paragraph 3, there has been an increase in national authority regarding oil production which has placed the power to license oil ventures far more within the control of the relevant African Governments.

In the 1980s, as a result of the decreasing demand for oil there was a significant surplus in production, and prices declined significantly. This limited new investment into African oil-producing nations, and oil production saw little-to-no increase, while OPEC restrictions on production further slowed progress through the period.

As oil prices began to recover at the end of the decade, African producers saw renewed investment, following continued instability in the Middle East (in particular, the first Gulf war). The 2000s saw a sustained hike in oil prices, as tensions in the Middle East sustained economic growth, and a fall in the price of the US Dollar led to the price of oil rising from USD 30 per barrel to almost USD 150 per barrel in the July of 2008. This resulted in significant further investment into Africa with a variety of both onshore and offshore exploratory ventures being carried out.

However, the collapse in financial markets after the Global Recession in 2008 limited the expansion of the African oil industry. A period of price fluctuation and instability in oil prices followed, with investment and exploratory ventures in Africa faltering. This decline in investment was exasperated following the 2015 collapse in the price of oil.

As the oil price is undergoing a slow recovery, exploiting new discoveries in Africa is one of the key ways in which the oil and gas industry hopes to defer reaching “Peak Oil” in the coming years.

In order for Africa to take advantage of the full potential of the oil and gas industry within the continent, each state will need to analyse and evaluate the political, economic, legal, social and technological factors when assessing the development of its own oil and gas sector.

The future of oil and gas in the African continent will be focused around new and diversified energy sources, maximising regional trade, investing in technology developments, constraining geopolitical forces and protecting their financial resources.

However, the emergence of a new era of structurally lower oil prices is challenging business models that have long relied largely on exploration and production of hydrocarbons, especially ‘black gold’ (oil).

NOCs in Africa stand on the brink of significant disruption and of substantial opportunity. For decades African countries that have depended on their NOC as a key source of Government revenue may need to rethink their business models to avoid being captive to a single energy source and to allow them to rebalance budgets. This will become an increasing priority with the emergence of social and political challenges amid slowing regional economies.

The year 2017 saw relatively slow growth and NOCs will be forced to diversify beyond their historical reliance on oil owing to several reasons:

The adoption of digital technologies will be key to the transformation of NOCs, but could also allow early-stage NOCs to ‘leapfrog’ stages of development much in the way telecoms and financial services are already doing across the continent. Developing a new generation of digitally-enabled talent as well as creating new ways to engage robustly with domestic regulators and Governments will be key to this journey. Partnering with International Oil Companies (IOC) offers significant advantages as NOCs pursue a new strategy of diversification, allowing them to source and develop new capabilities.

In recent years, the production of gas has increased more rapidly in Africa than anywhere else in the world, with the exception of the Middle East. There has been an increase in the investment into the African continent, from national oil companies from outside Africa, including China, Malaysia and Russia, which has created a link between broader infrastructure investments and Government-to-Government relationships in respect of the access to resources. The top twenty oil producing countries in Africa include Nigeria, Angola, Algeria, Egypt, Libya, the Republic of Congo, Sudan and South Sudan, Equatorial Guinea, Gabon, the Republic of South Africa, Chad, Cameroon, Ghana, Tunisia, Cote d’Ivoire, the Democratic Republic of Congo, Niger, Mauritania, Morocco and Malawi. It is expected that in China, unconventional oil resources will play an important role in oil production.

Onshore gas and new-resource development in the emerging East African hydrocarbon producers are expected to become the other main engines for growth. 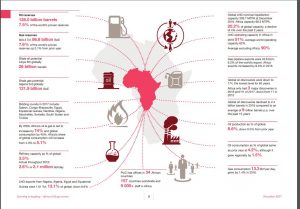 Prev MARKET AND PRICING
Next OIL VS GAS – TECHNICAL EXPLANATION