INTRODUCTION TO OIL AND GAS

Oil and gas is formed naturally through the decomposition and pressurisation of algae, plankton and other organisms. These elements interplay within various processes which all make up the hydrocarbon system.

Over time, the fossils of small sea plants, animals and other organic substances are covered by a layer of sediment and rock, known as ‘source rock’. Then, over millions of years, this layer is buried under more and more layers. The temperature of the source rock rises as it is buried deeper beneath the earth’s surface. The increased temperature, along with the rising pressure, then breaks down and cracks the organic matter in the source rock, which in turn releases the hydrocarbons. This process is known as thermal maturation.

The amount and nature of the oil and gas that is produced will be dependent on how deep the organic matter is buried (i.e. the amount of pressure being applied), the temperature range along with the type of organism that was initially buried.

The rock in which the oil and gas accumulates is known as the ‘reservoir rock’. The reservoir rock needs to be both porous, to allow for the accumulation of hydrocarbon, and permeable, so the hydrocarbons can move both into and out of the pore spaces.

In order to understand the pathway connecting the source rock and the reservoir rock, it is important to remember that oil is lighter than water, and gas is lighter than oil. The spaces between the rocks that lie beneath the earth’s surface are filled with water, and as a result of the buoyancy of oil and gas, they are pushed up through the water filled spaces in the overlying rock towards the surface. This means that the more porous the rock, the better the migration pathway.

Exploration is the process of finding reservoirs of oil and gas deposits under the surface of the earth. Exploration is time consuming, capital intensive and highly uncertain.

Production is the process of recovering those deposits and refining them for consumer’s end use.

In the search for oil and gas reserves, there are a number of different types of geophysical surveys conducted and measurements performed including the use of gravity and magnetic surveys as well as seismic surveys. A starting point would normally be to conduct seismic surveys, which involve the use of shock waves generated by setting off explosive charges in small-diameter holes. Currently, the primary exploration tool used is 3D seismic data, which allows for much more precise imaging of both the structure and the stratigraphy of a trap.

The measure of time between the setting off of the shock wave and the echo gives geologists an idea of what the rock formation might look like underground and indicates a potential oil and gas reserve. Once an area of interest has been identified, more detailed mapping is conducted through the use of:

Once a potential site has been identified, an exploration company will drill into that rock to investigate whether there is actually oil and gas.

The next stage in exploration is known as appraisal, which involves the drilling of a hole into the rock to create a well for oil and natural gas production. There are a number oil wells that can be used, each with different functions:

Depending on the geology and characteristics of the reservoir, a number of wells may be required to produce the gas over the life of the resources. Well costs vary depending on:

There are many different types of drilling rigs used and the type of rig suitable depends on the specific requirements of each drill site and well. Rigs are generally categorized as being either onshore (land) or offshore (marine).

Onshore rigs are all similar, and many modern rigs are of the cantilevered mast, or “Jack-knife” derrick type. This type of rig allows the derrick (used to position and support the drill string) to be assembled on the site, and then raised to the vertical position using power from the draw works, or a hoisting system. These structures are made up of prefabricated sections that are moved onto the location by truck or helicopter.

The different rigs that are used at sea really depend on what the sea conditions are and how deep the water is to get to the reserve. Barges, are generally used in situations where there is very shallow water. Semi-submersible rigs may be used in fairly deep water, where they are floating but anchored by cables into the ground to stop moving significantly.

A drill bit is used to chip and grind the rock formation into right sized particles, providing cuttings, which are easily removed by the circulating mud. These cuttings are removed and stored nearby as they provide geologists with information about the subsurface. This rock core provides observations of sedimentary structures, bedding patterns, and detailed microscopic analysis for interpretation of environmental environments and prediction of reservoir quality.

The drilling process is expensive and involves significant amounts of risk, as the volume and quality of reserves is never entirely known. Statistics show that the likelihood of finding sizeable volumes of oil and gas during the first run is in the region of 20-30%. The cost of finding and developing oil and gas reserves has a significant impact on the long-term success or failure of an oil and gas company.

The factors which will be considered in determining the development of a field:

The exploration and production of oil and gas reserves is performed usually in terms of (i) a licence or (ii) a Production Sharing Agreement (PSA).

A developer will take on more risk and apply for a licence to search for and extract petroleum. Alternatively, developers will enter into PSAs with licensed entities usually national oil companies (NOC) to share risk, in terms of which the developer carries out the production work and receives compensation from the licensed entity in cash or a share of production.

Licences usually give their holder ownership of petroleum flowing into wells, while PSAs usually involve only the contractual right to be delivered a portion of petroleum production. Licences are more common in developed countries, and PSAs are more frequently used developing countries. 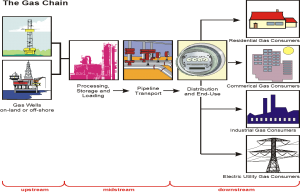 Rather than in pockets, shale gas is methane that is trapped in rocks (shale), so it is much harder and more expensive to extract than conventional gas. It is obtained by drilling a vertical well and then drilling horizontally along a shale formation, known as “dimensional drilling”. Water and chemicals are blasted at high pressure into the wellbore through the process of “fracking”. The water fractures the formation and the chemicals and proppants in the frack fluid holds open the fractures. This increases the permeability of the formation, and oil and gas flows more easily back into the wellbore.

Continuous flaring is usually required (up to 9 months) to establish the viability of the shale resource. It needs to be near a reliable water source (fresh and salt water acceptable) to provide the water that is required for the fracking process.